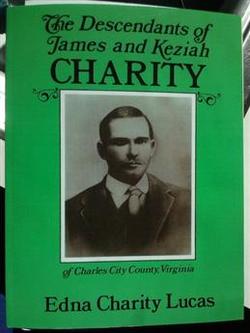 Edna Charity Lucas wrote what is often called The Green Book. Its official name is "The Descendants of James and Keziah Charity." ​

Edna Charity Lucas spent over 20 years researching this publication. She has provided us with an unmatched genealogical recounting of our family. Over 900 pages, she presents our family back to the year 1810, the first year in which she found a mention of James and Keziah from whom she directly traced our family’s roots. Indirectly, she traced us back to 1048 when she found the first mention of a Charity. In that year, Toussant Charity was mentioned in a historical document as a resident of Lincolnshire, England.

Edna Charity Lucas passed away in March 1993, two years after she finished this wonderful testament to her love of our family. This book will always keep her memory alive.

PLEASE NOTE: All monies will be held until 50 orders have been completed. The money will be kept in a separate Charity Family Reunion account until money for 50 books has been reached. There may be a little bit of a waiting game until there are paid orders from 50 people, at which time Treasurer Pamela Lane. will release all monies received to Tamara Lucas Copeland, so she can get the books made. The books will then be sent to all recipients. The faster 50 people pay, the faster we can get your books to you!